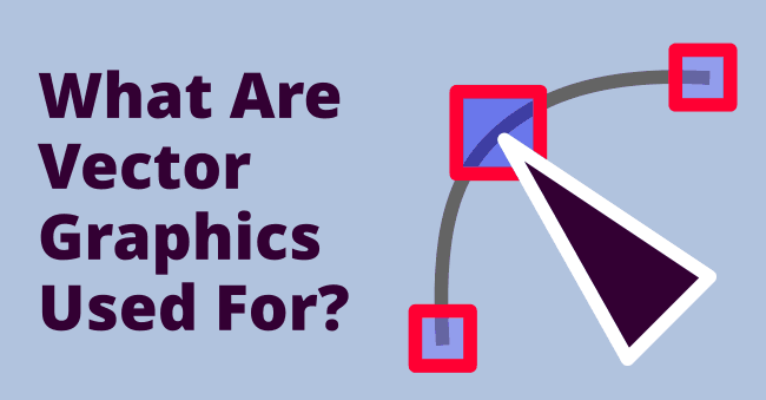 As a beginner graphic designer, one of the first questions you may ask is what are vector graphics and what are they used for.

In a nutshell, vector graphics are a method for generating computer graphics that are composed of lines on a computer screen (a canvas). Vector graphics allow us to create digital drawings in a way very similar to how we draw (such as creating lines on a piece of paper).

Vector graphics are one of the primary methods for creating computer graphics and are widely used today for creating logos, websites, 3D renderings, and animations, among many other examples.

In this post, we look at vector graphics in more detail and answer some important questions, such as what are their features, applications, and their most important uses.

History of Vector Graphics and How they Work

Before we go deeper into the features and advantages of vector graphics and how they work, let’s look briefly at their history and importance in today’s world.

Vector graphics have been around at least since the early 60s and were one of the first effective ways for generating graphics on a screen.

Ivan Sutherland pioneered one of the very first computer programs for generating graphics on a screen. He used his software Sketchpad for drawing lines on a screen. This program was a precursor of CAD (Computer Assisted Design) software, which relies heavily on vector graphics.

However, the theoretical grounds for vector graphics date back to at least the 1800s with the concept of Euclidean vectors. Basically, a mathematical equation is able to describe two points on a plane by determining their locations and direction.

Why does this matter?

But what does this mean?

It means that if we know the position of at least two points on a plane, we are able to draw a line between those two points.  This has many important implications in terms of the graphics we see today, but it is a very simple principle.

Remember those connect-the-dots drawings from our childhood?

This is pretty much how vector software renders drawings!

The software generates the lines that make up a drawing because it knows where all the points needed for those lines are located on the canvas (the screen) and their direction.

Vector graphics use a system of coordinates for rendering drawings.  Pretty cool!

Vector graphics have a very specific set of features that make them unique and powerful.  They are all around us and we see them everyday. In fact, distinguishing vector images in everyday life is a great way for learning some their key features.

These are some of the most important features of vector graphics:

They have “infinite” resolution

You may have heard that vector graphics do not lose their quality or that you can zoom in on them indefinitely. And for the most part, this is true.

Because vector graphics do not depend on pixels (dots on the screen) but on coordinates on a plane (dots connected by lines, so to speak), we can scale (make bigger) a line, curve, or shape to whatever magnitude we want and always see their exact features.

Since the software always know what the points are on the screen, it always knows the line that goes with them, so to speak (it knows the position and direction between two points).

If we were to zoom in on a line, let’s say at 3,000%, we would see a black screen indefinitely (unless our screen is one of immense digital billboards on the side of buildings!).

They are lightweight (small file-size)

Vector files have less information in the them than, say, pixel files (such as a picture taken by a phone or digital camera).

They only contain in them a bunch of coordinates instead of more complex information, like the thousands, or even millions, of pixels in a digital photo.

This comes as an advantage of vector files, since they can have very compressed drawings in them that require less information to produce.

They can produce realistic results

But here’s the catch:

In my experience, only inanimate objects can achieve this realistic look, although animals can look pretty realistic too.

You can draw amazing people with a vector program.  However, they will always look more like a painting than a photograph.

Pixel, or raster graphics, are better suited for dealing with actual images of real people and things.

One cool thing about vector graphics is their versatility.  Vector graphics programs, such as Inkscape or Illustrator, can do so much more than only lines on a screen.

Here’s a few of the things you can do with vector programs:

They are easily manipulated

You can manipulate vector graphics easily and precisely.

Because the program knows where two points on the screen are at all time, it allows you to easily add other points along that stroke (called nodes) and even infer where some other points adjacent to the main nodes, which allows you to create curves or arches (called Bézier curves).

You can also easily add color to the strokes you make, even gradients.  You can create shapes with lines (such as a square) and then manipulate that shape in its totality by skewing, rotating, or scaling it.

You can even transform the little nodes that make up a stroke or shape by rotating them or changing their intersections.

Vector graphics are extremely useful for graphic design. Also, they are extremely common and versatile. They are all around us and we see them everyday.

In fact, distinguishing vector images in everyday life is a great way for learning some its key features.

If you look around closely–apps, advertisements, websites, business cards–you’ll notice that vector graphics are a very important aspect of visual communication.

This is what I mean:

The aesthetics of vector graphics have come to dominate the look and feel of contemporary branding with a minimalist, clean look with expressive, colorful illustrations and clean, geometric icons.

What are the best examples of this:

When you think about today’s uses of vector graphics, you’ll notice how these uses actually affect design trends.

These are some of the most common uses for vector generated images in graphic design today:

While raster graphics are beyond the scope of this post, but here’s a great article that explains what they are:

The advantages of vector graphics are closely related to their features and uses.

In a nutshell, you can get started using vector graphics with relative ease, with powerful, free software available for immediate download (such as Inkscape).  Files are lightweight and serve multiple purposes, including the creation of PDF files or PNG images.

But probably the main advantage is this:

Vector graphics’ versatility (which allows you to work with shapes, lines, color, text, and even raster functions, such as filters, gradients, and some pixel manipulation) make vector graphics an excellent option for design and a superb starting point for learning graphic design on your own.

These are some of the main advantages of vector graphics:

When Not to Use Vector Graphics?

Vector graphics, of course, are not the only way for creating computer graphics, and that’s because their uses and applications are not infinite.

In general, vector graphics can’t be used to edit pixel images (such as pictures you take with a digital camera or smartphone).  If you want to edit a red eye, hair color, or change the background of a pixel image, you need to use a raster program such as Gimp (which is free and open source) or something like Adobe Photoshop.

If your projects primarily deal with images of real things (that is, images that are not drawings or illustrations), then you will not be able to rely on vector graphics software.

For example, if you’re working with a fashion magazine, a photojournalism blog, or some types of advertising, then you will need to use a great deal of pixel programs (such as Gimp or Photoshop).  Retouching the picture of a model or modifying the illumination of a portrait are some of the operations that require a pixel graphics program.

In this post, I showed you the features, uses, and advantages of vector graphics in design.

This is the bottom line for vector graphics:

There you have it! start experimenting with vector graphics right now.

How would you use vector graphics?  Let me know in the comments below to give you some guidance!

Ruben Ramirez teaches Digital Media at the University of Puerto Rico and started Self-Made Designer for his students. He likes skateboards, guitars, and vector graphics.